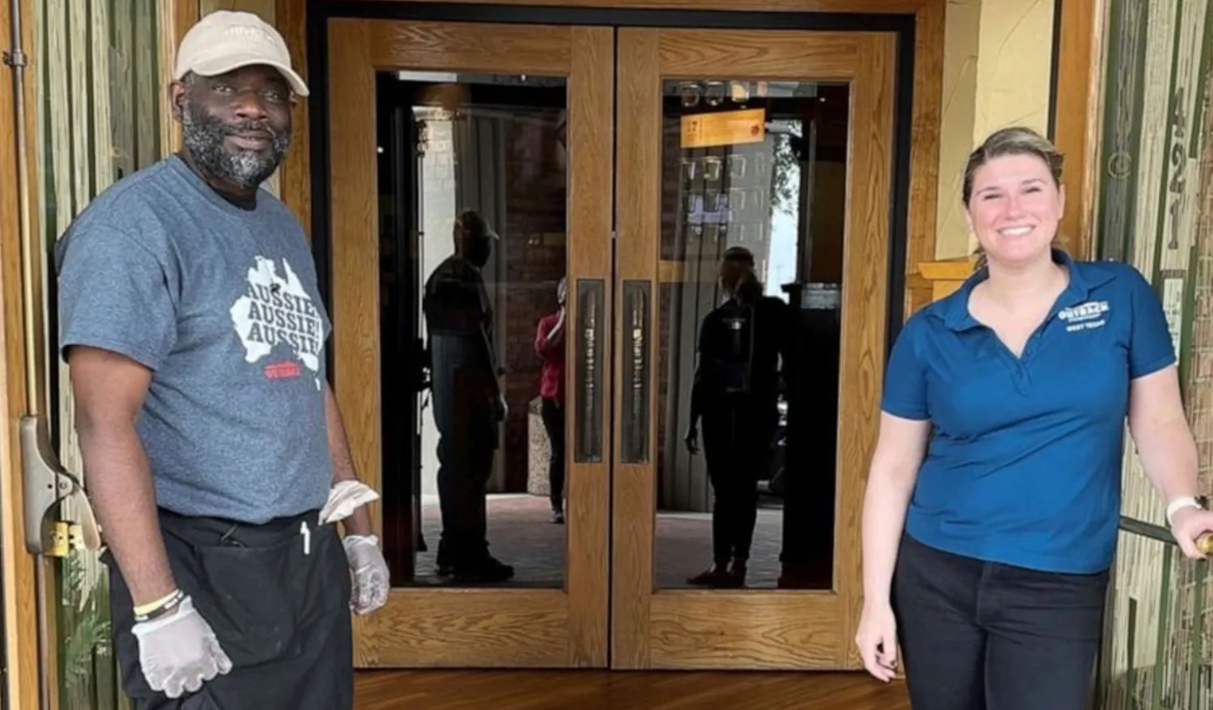 Nine months ago, Kenneth Smith was lying out of an Outback Steakhouse with his yellow backpack for a pillow. He was hungry and”at the point of giving up on life.”

This was until he met Laura Hodges, the managing partner of the Fort Worth, Texas, eatery.

It began after a complete stranger had tapped Smith on the shoulder while he was sleeping outside the restaurant to determine if he was okay.

“I said I was hungry, starving, and actually looking for someplace to stay,” Smith told Fox News. It is a struggle he was facing while living on the streets for the past four to five decades.”

The good Samaritan immediately walked into the steakhouse and bought him a $100 gift card to get a hot meal. That very gift card changed the course of his life, according to Smith.

When Smith walked inside he met Hodges, who immediately told him to put the gift card away. Instead, she offered to cover his meals whenever he was hungry.

“I ended up giving him my business card,” Hodges told Fox News. “And I’m like, ‘look, I don’t know if you hang out here very often, but if you ever need a meal or anything like this is my card … just come in any time you just need something to eat … we’re happy to help you.'”

For months Smith came into the restaurant multiple times a week to eat and each time, Hodges got to know a little bit more about him, his life and his story, she said.

About two-and-a-half months ago, she offered him a job as a busser.

“To me, she is an angel. She is an angel from up above,” Smith said. “If it were not for her, I would not even be here.”

Before his first day, Hodges bought Smith his uniform and toiletries and even paid for him to stay the night in a hotel.

“He managed to get clean and all of the fantastic stuff and feel great about working the following day,” Hodges said.

Shortly after he began working, Hodges reached out to a community Facebook page, asking for recommendations on motels that he could afford to stay in each night.

“I have recently employed a homeless gentleman. He’s wonderful and works really hard. He tries to cover a dinning room every day,” she wrote on Facebook in April. “Does anybody know of a motel close by that rents for less than $60 per night. He’s just trying to have a fresh start.”

The post blew up, Hodges said. The community rallied behind him and began donating money, clothes, toiletries and even a bike to help him out.

“People just thought it was so good that he had been working and trying and [they] wanted to see him do well,” she said. “They just started building a relationship with him.”

People would stop in just to see how Smith was doing, she added. She also gets daily letters sent to her mailbox for him. They are either filled with money or well wishes.

“My article literally just asked if anyone had a hotel recommendation. It never asked for help, but that is the way they took it.”

However, Hodges acknowledged that this never would have transpired if it weren’t for that good Samaritan offering him the gift card almost a year ago.

“She just wanted to do something which helped someone… I think that’s exactly what just started that’pay it forward’ mindset,” Hodges said.

Now Smith is looking out for opportunities to do something nice for someone else, she said.

“I just believe that paying it forward mindset [has] just been abundant… in our world at the moment and our community,” Hodges said.