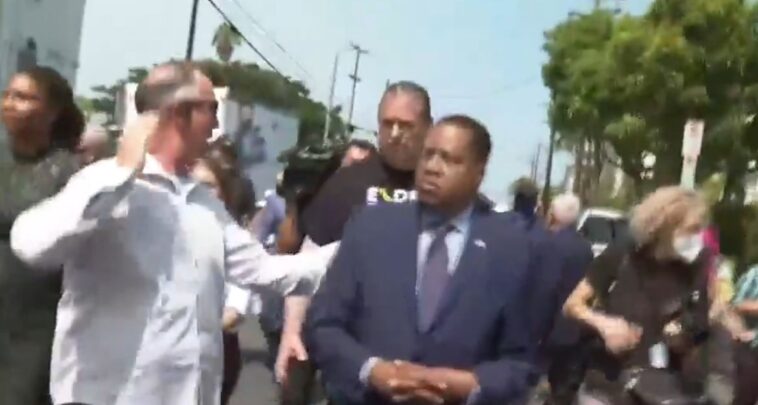 Larry Elder, a California governor-elect candidate, was marching through Venice with his supporters on Wednesday when left-wing oppositionists attacked him.

“Videos of the incident show a first egg flying through the air and nearly hitting Elder,” Fox News noted. “A member of Elder’s team is then seen putting his arm on the candidate’s back and saying: ‘We’re getting egged from behind’.”

The threat that Larry Elder poses to Gavin Newsom has caused a panic in the Los Angeles Times. The LA Times ran a column calling Elder the “black face” of white supremacy. It also ran columns that supported the absurd assertion and claimed that life would “get harder” for California’s blacks if Elder was elected to the recall.

California’s polling is designed to demoralize Republican residents and suppress opposition votes. Numerous left-wing polls show that the majority of Californians prefer to “keep” Newsom rather than replace him with someone more competent. Californians should care only about one poll. It ends Tuesday, September 14.

If Newsom’s spot as California governor was secure, you wouldn’t have former President Barack Obama cutting throwaway ads supporting him, or a vice president taking time out of her presumably busy schedule to campaign for him, as Kamala Harris did on Wednesday.

“California Gov. Gavin Newsom has been doing everything he can to persuade women to vote ‘no’ on the Republican effort to oust him in Tuesday’s recall election, and in Vice President Kamala Harris on Wednesday he got his most high-profile surrogate to date to help deliver that message,” CNN reported.

“The former California senator, who remains enormously popular among Democratic women and progressive voters of color,” CNN claimed, “argued that the national consequences of this election could be huge if Newsom is replaced by a Republican.”

“You have to understand that this recall campaign is about California, and it’s about a whole lot more,” Harris said. CNN argued that Harris was “trying to nationalize the race by voicing her outrage about the conservative agenda, particularly Texas’ restrictive abortion law that went into effect last week.”

“In her biggest political event since she and President Joe Biden won the 2020 election, Wednesday’s rally also gave the vice president the chance to test-drive a midterm election message for the White House, following weeks of tumult for the administration and some early criticism of her performance,” the report added.

It seems like a lot was spent on a campaign for a California governor who is likely to be recalled. But, one thing is certain: California has many angry mama grizzlies who don’t want to see the despotic Democratic governor go back to office. To ensure that Newsom does not return to office, they will have to be there in force.

US Jobless Claims Reach a Pandemic Low as Economy Recovers