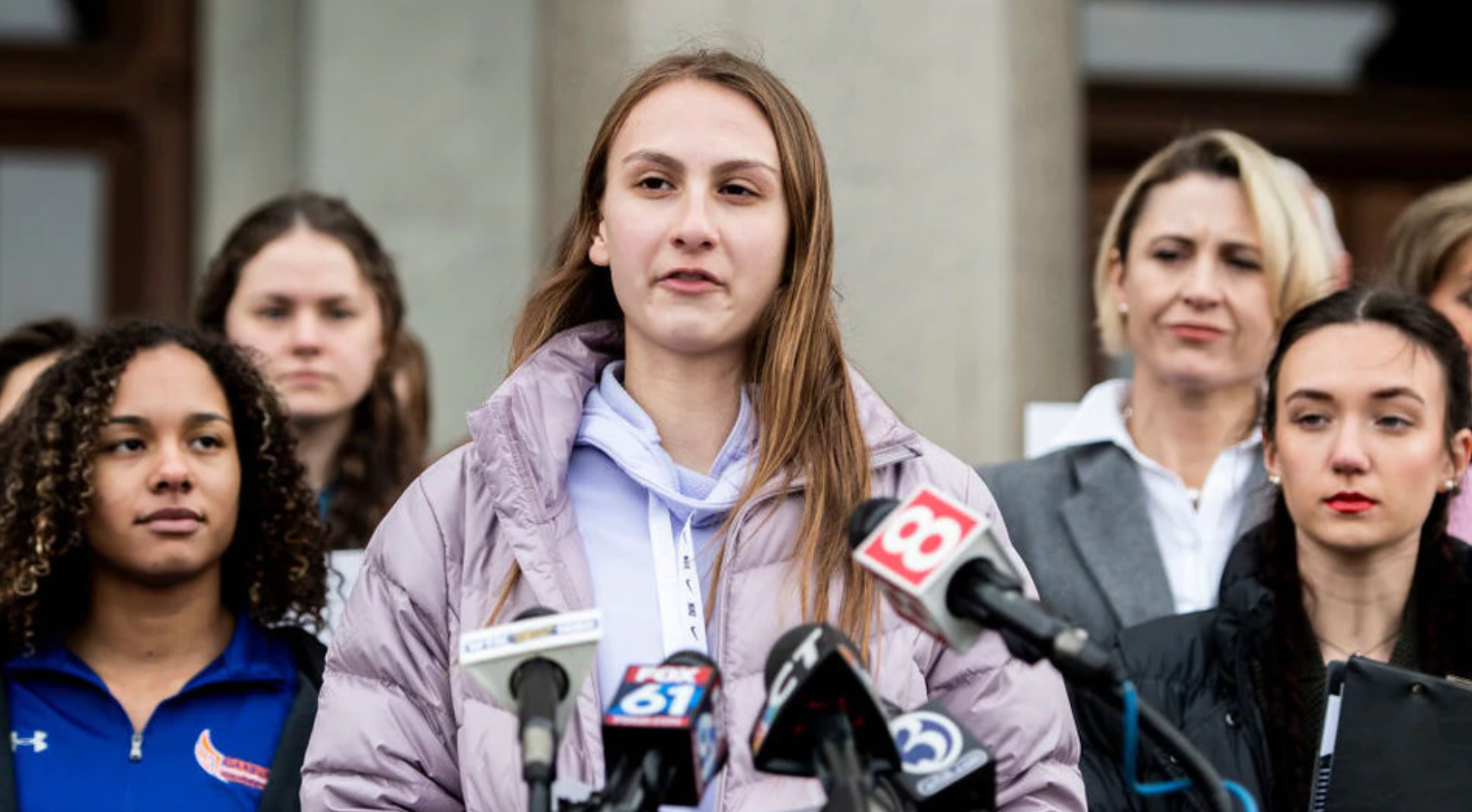 High school track star, Chelsea Mitchell is taking a stand for female athletes in an effort to fight Connecticut’s new allowance of trans athletes to compete in girls’ sports, according to The Western Journal.

Mitchell filed lawsuits against the state of Connecticut for allowing transgender biological males to compete in girls’ sports.

Mitchell said,”Time after time, I have lost. I’ve lost four women’s state championship titles, two all-New England awards, and numerous other spots on the podium to male runners. I was bumped to third place in the 55-meter dash in 2019, behind two transgender runners. With every loss, it gets harder and harder to try again.”

“That’s a devastating experience. It tells me that I’m not good enough; that my body isn’t good enough; and that no matter how hard I work, I am unlikely to succeed, because I’m a woman.”

“Girls and women shouldn’t be stripped of their right to fair competition.”

“In the 2017, 2018, and 2019 seasons alone, these males took 15 women’s state track championship titles (titles held in 2016 by nine different girls) and more than 85 opportunities to participate in higher level competitions that belonged to female track athletes,” said Mitchell.

“That’s because males have massive physical advantages. Their bodies are simply bigger and stronger on average than female bodies. It’s obvious to every single girl on the track.”

The court basically dismissed the lawsuit.

In response to the court’s dismissal of this litigation, Mitchell said the suit”tells women and girls that their feelings and opportunities don’t matter, and that they can’t expect anyone to stand up for their dignity and their rights. That’s wrong. And it chips away at women’s confidence and our belief in our own abilities.”

“The race is stacked against me.”

“I’ll never know how my own college recruitment was impacted by losing those four state championship titles. When colleges looked at my record, they didn’t see the fastest girl in Connecticut. They saw a second- or third-place runner.”

"I was the fastest girl in Connecticut. But transgender athletes made it an unfair fight." -ADF client Chelsea Mitchell via @USATODAY https://t.co/i3tjFkXfwb

“I’m not beaten yet. And neither are my fellow female athletes.”

“Through our ADF attorneys, my fellow athletes and I are appealing the federal district court’s ruling.”

“We’re taking our case to the U.S. Court of Appeals for the 2nd Circuit, where we are going to ask once again for the court to recognize our right to fair competition — a right that Title IX has promised to girls and women for 50 years.”

“And we’re fighting not just for ourselves, but for all female athletes.”

“So as we prepare for this next step in the case, I’m settling into my starting blocks again, but for a different kind of race. And this time, I’m confident that we can win.”

Like many high school athletes, Chelsea Mitchell invested years of hard work to be a track star. But no amount of training could prepare her to compete against male athletes.#WATCH her story here: https://t.co/vz7q7oEl2M#sexnotgender #fairplay @AllianceDefends #SaveWomensSports pic.twitter.com/1TqEwFvzKg

“Our clients — like all female athletes — deserve access to fair competition; that means authentically equal opportunities to compete, achieve, and win.”

“But competition is no longer fair when males are permitted to compete in girls’ sports,” ADF Legal Counsel Christiana Holcomb stated.

“Men will have inherent physical benefits over comparably trained and talented women; that’s why we’ve got girls’ sports in the first place.”

“Unfortunately, this court has chosen to ignore our clients’ demoralizing experiences of losing to male runners.”

“But these dedicated female athletes–and young girls throughout the country — deserve far better.”

“Today, the conversation centers around Connecticut’s high school track and field program, but there is something larger at stake here: Women and women deserve opportunities which are really equivalent — without being sidelined or dominated by men deciding to join their game.”

“I had been bumped to third position at the 55-meter dashboard in 2019, behind two male runners.”

“With each loss, it becomes harder and harder to try again,” she wrote.

“[CIAC’s policy on transgender athletes] robs women of the opportunity to race in front of college scouts who appear for elite matches, and to compete for the scholarships and opportunities that come with faculty recruitment.”

“We’re taking our case to the U.S. Court of Appeals for the 2nd Circuit, where we are going to ask once again for the court to recognize our right to fair competition — a right that Title IX has promised to girls and women for 50 years,” Mitchell said.