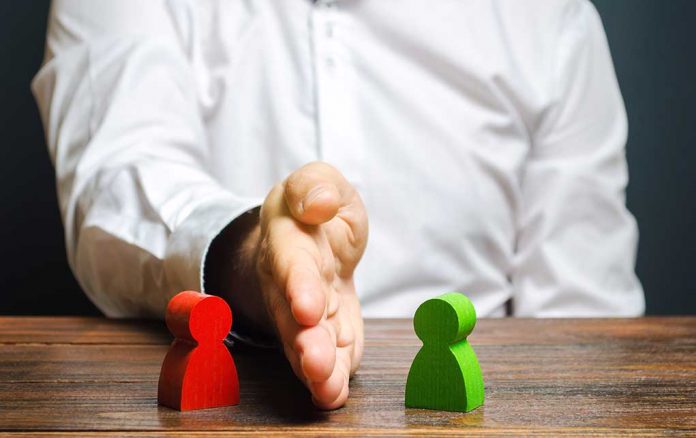 Democrats have been trying to divide the country along racial lines for years. Although it has caused tension, they have been mostly unsuccessful. Republicans have worked hard to stop their divisive attempts and have been slammed.

The Left is now trying to use COVID-19 to divide people. Millions of Americans have been vaccinated. However, some people still don’t want or are unable to get the vaccines. Unfortunately, many Liberals don’t see it that way.

Federal employees will now be subject to new requirements as a result of President Joe Biden’s announcement on July 29th. All federal employees must now sign forms agreeing either to receive the COVID-19 vaccination or to follow strict testing guidelines. The vaccine is not available to everyone. Those who are unable to get it will be required to wear masks and undergo weekly testing. They also have the obligation of social distance, as well as following other rules.

These new rules will have an impact on upwards of 7 millions federal employees and contractors. Biden is not the only Democrat to implement vaccine rules.

Vaccine Passports in the Big Apple

Bill de Blasio, NYC Mayor, recently announced that anyone who wants to enter bars, gyms, performance venues or indoor dining areas will need to be vaccinated. Although the mandate will be in effect from August 16, authorities won’t begin enforcing it before September 13.

“If you want to participate in our society fully, you’ve got to get vaccinated,” De Blasio said.

Fox News’ Sean Hannity, a Fox News reporter, discussed the mandate and said that it will disproportionately affect black residents of the cities. He noted that while the Left calls voter ID laws “new Jim Crow,” the mayor now requires the same thing to prove that they’ve been vaccinated.

On August 3, former Assistant Secretary for Homeland Security Juliette Kayyem wrote an op-ed for The Atlantic calling for unvaccinated Americans to be put on the federal no-fly list. The original title of the article was “Unvaccinated people belong on the no-fly list,” but the website updated it to “Unvaccinated People Need to Bear the Burden.”

Kayyem claimed that a no fly list for unvaccinated persons is an “obvious” step that the federal government should make. She claimed that there are regulations already in place that would allow it to do so. She stated that flying is not an option.

It is similar to Jim Crow segregation, which prevented people from leading a normal lifestyle and made them feel excluded because they did not have to undergo any medical procedures. This is completely unAmerican.