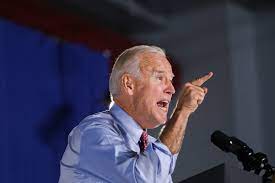 By now you’re probably not shocked to hear about Joe Biden cheating, but this time around, it’s not election-related. Instead, the president was caught using “cheat cards” – or “flash cards” – during a meeting with Russian President Vladimir Putin.

And it’s worth noting that the Russian president didn’t need to rely on cheat cards to get through the meeting.

You can see in the clip below that while the Russian president spoke briefly to the camera before their meeting officially began, President Joe Biden reached and grabbed his cards to make sure he didn’t forget what he needed to say.

Biden brings flashcards to his meeting with Putin. pic.twitter.com/pQy5TVs8nT

The United States president met with the Russian leader on Wednesday in Geneva, Switzerland.

It’s hard to know what was on the notes because the nature of the meeting between the two presidents is still barely known. There was no joint press conference with the two leaders after the meeting, either, which is typically what world leaders do after a discussion.

It stands in stark contrast to the promises made by Joe Biden during his campaign to level with the American people and be transparent. This is so far the most opaque meeting between two world leaders in years.

President Donald Trump was more transparent about his meeting with secretive communist dictator Kim Jong Un than President Biden was with Vladimir Putin!

Biden said that he achieved what he set out to do with Putin, but for a man who can’t remember what to say without flash cards or a teleprompter, does that mean all that much?