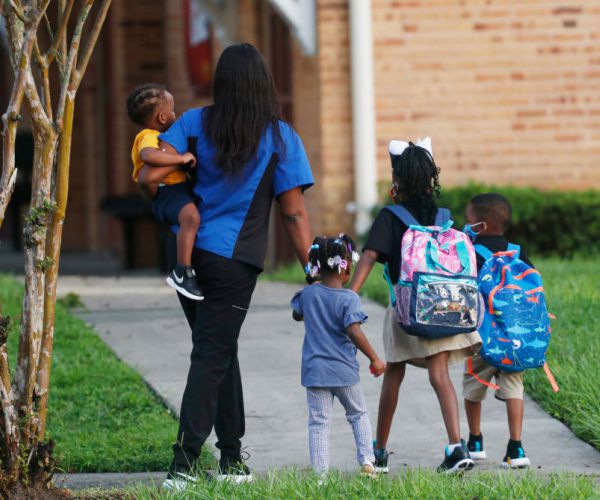 A school district in Tallahassee announced on Sunday in a video on Facebook that it will require masks for students from pre-kindergarten to eighth grade starting Monday in defiance of Florida Gov. Ron DeSantis’ order.

“Governor, I do have an obligation to uphold the laws of the state of Florida,” Leon County Schools Superintendent Rocky Hanna said in the video. “I have a greater obligation, however, to protect for the health, safety, and welfare of the children in Tallahassee and Leon County.”

Hanna’s decision comes days after Florida’s Board of Education warned two other school districts that they could lose funding if they do not abide by DeSantis’ orders, according to The Hill.

Hanna stated that he wrote earlier this month to DeSantis’s office to ask for more flexibility in the governor’s order. This order makes masks optional.

Hanna said that he wanted everyone wearing masks because children were becoming more susceptible to the deadly Delta variant. This was especially true for those who were not eligible for the vaccine.

Hanna claimed he didn’t receive a reply from the governor’s offices and announced that the district would need masks with a medical exemption option two days before school started.

Hanna claimed that he and the board decided to open the school after Hanna received a “very harsh and threatening” letter from Richard Corcoran, Florida Education Commissioner. Corcoran warned that Hanna and other Leon County school board members would be in violation of the law if they enacted their original decision.

Hanna stated that DeSantis was defying the district on Sunday after the district registered more than 245 positive cases within the week students were in school. This was almost a third of the total he had last year.

Hanna asked DeSantis if he would change his position on school masks and “give local control back the school districts to do the best for our children.”

The superintendent stated that “I am totally in favor of individual freedoms and rights, as well as the rights of parents. However, I strongly believe my rights end when they infringe upon the rights of other people.”

He stressed that the masks do not just protect the wearer of the mask, but also protect the child who is near them. “It has been well documented by the vast majority health care professionals that these masks protect the child beside the person wearing them. To me, your rights cease when the rights of that child are violated.”